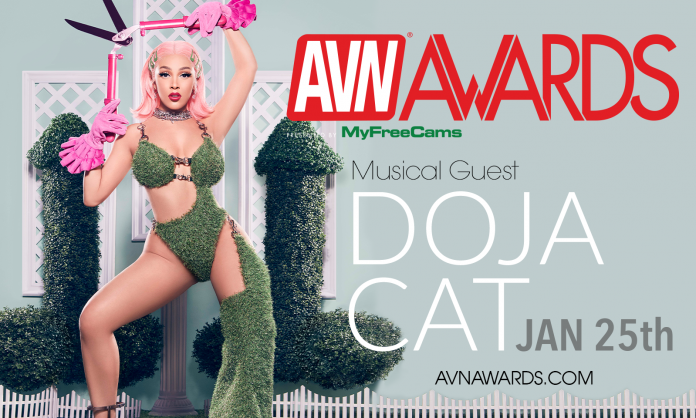 ANOTHER FIERCE WOMAN JOINS THE ROSTER OF FEATURED MUSICAL GUEST OF THE AVN AWARDS!
The Sexiest Awards of the Year to Take Place at The Joint in the Hard Rock Hotel & Casino Las Vegas on Saturday January 25, 2020
AVN Media Network has done it again! They are featuring female musical artist, Doja Cat, as their 2020 AVN Awards musical guest. Following on the heels of last year’s performance by Cardi B, Doja heads into the show having appeared on numerous “Best Songs of 2019” lists. Her chart-topping song, “Juicy” is currently at #9 on the Rhythmic radio chart and continues to climb the Urban and Top 40 lists. The AVN Awards, the sexiest awards show of the year, will take place on January 25, 2020 at The Joint inside the Hard Rock Hotel & Casino Las Vegas.  AVN president Tony Rios made today’s announcement.
“I’m so proud that we are able to feature another female musical artist at AVN Awards,”  commented Rios.  “The response last year was overwhelming not only because it was Cardi B but because it was our first woman.  We know that Doja Cat will take the performance to the next level and astound our audience with her unique performance style.”
“I’m honored and excited to be the second woman ever to perform at the AVN Awards,” said Doja Cat. “We’ve got something special planned for you all.  Can’t wait!”
Born and raised in L.A., Doja Cat made her first upload to Soundcloud in 2013 at just 16-years-old. She developed a knack for music by studying piano and dance as a kid and listening to the likes of Busta Rhymes, Erykah Badu, Nicki Minaj, Drake, and more. The budding talent taught herself Logic and how to compose on a midi controller.  Signed to RCA during 2014, she unveiled her acclaimed Purrr! EP. Its lead single “So High” impressively racked up over 30 million cumulative streams and garnered praise from tastemakers such as Fader, Vibe, Paper, Pigeons & Planes, and more. Along the way, she assembled what would become her debut album, Amala which was released in March 2018.
Cooking up vibrantly, candy-coated beats, dropping bars doubled-up on double entendre, and singing with claws out, Amala unlocks a sweetly sexy world soundtracked by wild hip-hop, twisted pop, and smoked-out R&B. Asserting a feline-esque dominance and a style that can only be described as every color in a box of crayons, Doja Cat’s unapologetic charisma, charm, and confidence immediately take center stage.
In August 2018, she released what would become her viral hit “Mooo!” which enjoyed over 10 million views on YouTube and Twitter in just a couple of days and was met with critical acclaim. With co-signs from Chance The Rapper, Katy Perry, Chris Brown and J.Cole among others, “Mooo!” propelled Doja Cat forward and added many fans to her already feverishly loyal fan base. She went on to sell out a nearly sold out headlining North American tour this past fall and wowed audiences with her high energy performances.
Earlier this year, Doja followed up with her smash hit “Tia Tamera” ft. Rico Nasty. The track and its colorful visual combined have been streamed over 100 million times worldwide.  In March 2019, she released the Amala Deluxe album which included her brand new song “Juicy.” When touring Europe this spring, Doja stopped by COLORS and gave an incredible stripped down performance of the track. In August, she followed up with a new version that included rapper Tyga and a wildly colorful and fruit filled visual that has been praised for its body positivity. The video has over 56 million views to date and has been praised by the likes of Harper’s Bazaar, Pitchfork, Billboard, Elle, FADER, Complex, appearing on many “Best Songs of 2019 (So Far)” lists. “Juicy” is currently at #9 on the Rhythmic radio chart and continuing to climb at Urban and Top 40. Doja and Tyga delivered a colorful performance of the track on Late Night With Seth Meyers last month. With the release of Hot Pink, Doja’s ability to create hit records that are uniquely her own are what will continue to make her a standout act in 2020.
The 2020 AVN Awards will be hosted by adult stars Nikki Benz and Emily Bloom on January 25, 2020, as part of the AVN Adult Entertainment Expo scheduled January 22-25 at the iconic venue. Both the 2020 AVN Awards and the AVN Adult Entertainment Expo are presented by MyFreeCams.
Tickets are now available by clicking here AVN Awards.  For hotel reservations and accommodations, click here Hard Rock Hotel and Casino.
Fan voting for the 2020 AVN Awards Fan Voted Categories begins in November and continues until January. For more information about the Awards and the Fan Vote, visit AVNAwards.com. 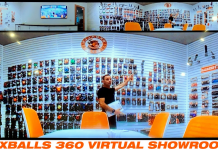 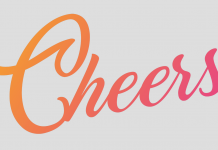 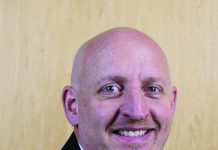 August 7, 2020
Oxballs launches its 360 VIRTUAL SHOWROOM program, immediately ready to schedule for team trainings and buying meetings. Nothing can replace in-person connections, but this...

August 7, 2020
Eldorado Trading Company, the award-winning distributor of adult toys, lingerie, and party supplies is excited to announce the appointment of Derek DalPiaz to the...
- Recommended Service1 -

August 7, 2020
Oxballs launches its 360 VIRTUAL SHOWROOM program, immediately ready to schedule for team trainings and buying meetings. Nothing can replace in-person connections, but this...